Home » Pumpkin - All you need to know

Pumpkin is a star ingredient to incorporate into your recipes. In this post, I will introduce all you need to know about this incredible vegetable (well actually it's technically a fruit!)

Pumpkin is a delicious, versatile, and easy ingredient to add to your recipes. They have a naturally sweet flavor which makes them a suitable ingredient in dishes like custards, cheesecakes, pies, cakes, pancakes, and ice-creams. However, it works just as well in savory dishes such as roasted vegetables, soups, curries, stews, and pasta.

There is no denying that once autumn rolls in, the pumpkin reigns supreme. All year long folks wait for their favorite coffee shops to fill with the aroma of spiced lattes. It's the season when grocery stores stock their shelves with limited-edition cookies, cakes, pies, and ice creams. October is synonymous with Halloween jack-o-lanterns; as Thanksgiving and Christmas approach we pull out our time-honored pumpkin pie recipes. It seems that no food symbolizes the blustery Autumn fall season quite like pumpkins do.

The first pumpkins held very little resemblance to the sweet, bright orange variety we are familiar with today. The original pumpkins were small and hard with a bitter flavor. Rather than using their nutritional and readily available seeds, pre-Columbian natives grew pumpkins for their flesh.

They were among the first crops grown for human consumption in North America. Thanks to their solid thick flesh, pumpkins proved ideal for storing during cold weather and in times of scarcity.

Pumpkins are grown all around the world for a variety of reasons ranging from agricultural purposes (such as animal feed) to commercial and ornamental sales. Of the seven continents, only Antarctica is unable to produce pumpkins!

In 2018, world production of pumpkins (including squash and gourds) was 27.6 million tonnes, with China and India accounting for half of the total. Ukraine and Russia each produced about one million tonnes.

Pumpkins are a warm-weather crop usually planted in early July. The specific conditions necessary for growing pumpkins require that soil temperatures 8 centimeters (3 in) deep are at least 15.5 °C (60 °F) and that the soil holds water well. Pumpkin crops may suffer if there is a lack of water or because of cold temperatures (in this case, below 18 °C or 65 °F). Soil that is sandy with poor water retention or poorly drained soils that become waterlogged after heavy rain are both detrimental.

Pumpkins are rather hardy, and even if many leaves and portions of the vine are removed or damaged, the plant can very quickly re-grow secondary vines to replace what was removed.

What is the difference between pumpkin and squash?

Well, to keep it simple, pumpkin is one type of squash and squash generally refers to four species of genus Cucurbita, including the species to which pumpkin belongs.

So, to make it clearer, both squash and pumpkin belong to the same family (the Cucurbitaceae). A pumpkin is a type of winter squash.

Squash is considered a fruit as it grows on a vine. We usually break down the squash family into winter or summer squash, depending on when they are harvested. While commonly viewed as a vegetable, a pumpkin is scientifically a fruit, as it contains seeds. That said, it’s nutritionally more similar to vegetables than fruits which is why I include it in the vegetable section on my food library!

Pumpkin has an impressive nutrient profile.

Besides being packed with vitamins and minerals, pumpkin is also relatively low in calories, as it’s 94% water.

It’s also very high in beta-carotene, a carotenoid that your body turns into vitamin A.

The main health benefits of including pumpkin into your diet on a regular basis:

How to cook pumpkin

Pumpkins have very tough skin, so it requires some effort to slice (Be careful with our fingers!) Once you cut it, scoop out the seeds and any stringy parts, then slice the pumpkin into wedges or dice.

The easiest way to cook a pumpkin is to toss the wedges in a little olive oil and roast in the oven until golden brown. This is a delicious way to cook pumpkin as the natural sugars in the pumpkin caramelize and give a satisfying flavor.

You can add pumpkin dice into curries, stews, and soups. Just be mindful of the size you cut them in ratio to the length of cooking time. They will break up if overcooked and boiled vigorously.

Try cooking pumpkin dice in water until cooked, strain, and blend until smooth. Use this puree in bread, pancakes, muffins, and pies.

The pumpkin seeds are also edible and packed with nutrients that offer other health benefits. Here is my recipe for Pumpkin Seed Milk. It is so easy to make, you can add to smoothies, muffins, pancakes, or simply pour over your Pumpkin Spiced Granola.

Pumpkin leaves, usually of C. moschata varieties, are eaten as a vegetable in Korean cuisine. In various parts of India and Madheshis prepare saag and kachri/pakoda of the leaves and flowers.

This is one of my all-time favorite Autumn breakfast recipes. You can make the mix the night before and pop it in the oven first thing in the morning. Let the aromatic spice aromas take over the kitchen.

A taste of Autumn with this delicious nourishing breakfast dish that is sure to brighten up a dark cold morning.
View E-mail Print Save Go to Collections 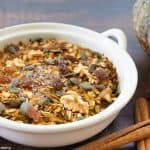 Eat local and eat seasonally. The best place to source your pumpkins is from your local market or grower. Pumpkins are a seasonal ingredient so enjoy them while they are abundant... they will not be available all year round!

Although, if you are resourceful, try cooking pumpkins into puree and freeze in a small bag. You can use this for making pies, cakes, and other recipes throughout the year.

Hi, my name is Jamie from Galway in the West of Ireland. I've been cooking in Michelin Star kitchens all around the world for most of my career. In 2015 I launched The Holistic Chef to focus on the nutritional aspects of food. Educate - Inspire - Empower became my mantra and mission. Currently, I'm living and cooking in Phuket, Thailand.

Life On Plants is a meal prepping members club. It makes plant-based cooking easy and fun!

Full support is provided to help you become a more confident cook.