Brazil nut is an Amazonian superfood filled with essential nutrients and minerals, they make a healthy addition to your lifestyle. In this article, I'll explain all you need to know about this incredible ingredient and how to make different Brazil nut recipes.

History of the Brazil nut

There has been a long history of extraction and collection of Brazil nuts from the rainforest of Northern Bolivia and Brazil. The annual collection is very important for the local communities, accounting for over half of these families’ incomes.

Brazil nuts have been eaten by the native people of the region at least since the Upper Paleolithic era, some 11,000 years ago. But the first mention of the Brazil nuts from Western sources goes back to 1569 during a time when Spanish and Portuguese explorers were tramping through South America.

Brazil nuts didn’t really take off until the Spanish and Portuguese made better inroads into the jungles. But, strangely, it was Dutch traders who first introduced the food to Europe in the early 1600s, although it would take another hundred years or so before they became popular there.

Brazil nuts first arrived in America in the early 1800s, and as in Europe, it took some time before they reached the kind of popularity that would land them in those ubiquitous tins of mixed nuts you find on your grocery store shelf. Today, nearly half the Brazil nuts imported to the United States come from Bolivia.

The local families depend on the virgin forest for survival, but significantly, so does the Brazil nut tree itself. Interestingly this canopy emergent tree has never been successfully cultivated outside the forest to produce nuts.

The Brazil nut tree is a great example of the interactions, complexity, and vulnerability of the rainforest ecosystem. The tree and therefore its fruits and the people who depend on them are inextricably linked to the intact standing rainforest and the creatures who live within it.

The magnificent trees are sparsely distributed in groups throughout the forest, where the nuts are wild-harvested each year during the rainy season. The trees, which have been found to live for over 650 years, require some very specific forest creatures to help them survive.

The Brazil nut trees life cycle is linked with the special animals and insects that live within the natural forest environment.

It is solely harvested in the wild from mature forests and has enjoyed widespread and longstanding economic success in the international market.

The Brazil nut is widely recognized as a model Non-Timber-Forest-Product for promoting tropical forest conservation.

Indeed, this single species has been credited with the protection of millions of hectares of intact forest in Brazil, Bolivia, and Peru where its commercial harvest and marketing represents a major income source for rural and peri-urban collectors and processors.

Consequently, Brazil nut productivity has become increasingly linked with the long-term reserve viability, particularly given the economic attractiveness of alternative land uses that least to forest conversion such as cattle ranching.

Is Brazil a nut or a seed?

A nut, by definition, is a hard-shelled fruit with a single seed. But Brazil nuts don’t fit that at all; they’re actually considered seeds since they come in large pods about the size of a baseball in groups of 10 to 24.

They’re more closely related to blueberries and persimmons than they are to walnuts or pecans. The pods are extremely tough – so much so, that there are only two animals that can open them: Humans, with the help of an ax or machete, and a small rodent, called an agouti, who gnaw the pods with their chisel-like teeth.

In Brazil, these seeds are called “castanhas-do-ParÁ¡” or “chestnuts from ParÁ¡,” after a state in Northern Brazil where the trees grow abundantly. While there are some plantations, most of the production comes from harvesting the pods in the wild, which takes place from December to March.

It’s a dangerous profession since each pod weighs up to five-and-a-half pounds and drops without warning from trees the height of an 18-story high-rise building. The pods hurtle toward the earth at 50 miles per hour with such force they can drive themselves deep into the ground!

Even the way in which the trees are pollinated is a bit odd. There’s only one insect for the job, the orchid bee, which is big enough, strong enough, and has a long enough tongue to pry the flower’s hood open and lap up the nectar within.

A serving of 3 Brazil nuts contains:

Brazil nuts are a great source of protein, essential minerals, and good fats

The fiber in Brazil nuts can help you lower your cholesterol. This is important since high cholesterol is associated with heart disease and other heart problems. The Mayo Clinic notes that several studies show a cholesterol-lowering effect from eating nuts regularly.

2. Good source of copper, which helps to build tissue and generate energy in the cells

Copper is one of those minerals that’s really important for our health. It doesn’t get its place in the spotlight as much as other minerals, like the aforementioned calcium.

Enjoy a couple of Brazil nuts each day to increase the copper in your body and promote overall wellness.

Brazil nuts are a good source of an antioxidant called selenium. According to the Cleveland Clinic, antioxidants help to keep disease at bay, and are specifically linked to a lower risk of heart disease.

It’s important to note that taking antioxidant supplements does not provide the same benefits as eating foods high in antioxidants — which is another good reason to choose Brazil nuts.

How to prepare and cook Brazil's

Brazil's come ready to eat. They are a delicious addition to baked goods, salads, and pasta dishes. I like to shave Brazil's with a micro plain over salads or pasta. 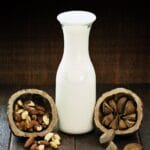 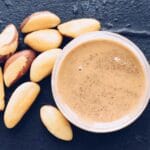 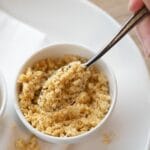 The Brazil nut tree has a lifespan of 500 years or more. According to some authorities they often reach an age of 1,000 years.

Where to buy Brazil's

Brazil nuts are available to buy at all good food stores and various online sources.

Can Brazil nuts be eaten raw?

Brazil nuts are actually edible seeds from the Brazil nut tree, and they can be eaten raw or blanched.

How much selenium is in a Brazil nut?

How many Brazil nuts should I eat in a day?

Try to limit yourself to one to three Brazil nuts per day to be safe. Eating too many Brazil nuts can be harmful due to their high selenium content.

Why are Brazil nuts so expensive?

Brazil's are often found in remote locations in the Amazon and require at least 12 years of growth before they yield any nuts. In fact, the extent of the supply shortfall is such that Brazil has become a net importer of Brazil nuts, which in turn only further exacerbates the global scarcity of the nuts, pushing up prices.

Do I soak Brazil nuts before eating?

Some people soak all nuts before eating them and say that it improves digestibility. However, Brazil nuts do not contain the inhibitor that some other nuts have. So, there is no reason to soak them.

Brazil nuts come loaded with fiber and protein, both of which are essential for losing weight. They are also a good source of selenium, magnesium, phosphorus, and thiamine, all of which are said to be helpful in weight loss. Brazil nuts also contain L-arginine which is efficient in the fat-burning process.

Hi, my name is Jamie from Galway in the West of Ireland. I've been cooking in Michelin Star kitchens all around the world for most of my career. In 2015 I launched The Holistic Chef to focus on the nutritional aspects of food.