These Vegan Middle Eastern Recipes will be sure to brighten up your dinner table and tantalize your tastebuds! I love the flavors of the Middle East, a delicious blend of the Mediterranean and Arabic cultures. This cuisine lends itself well to plant-based eating, with endless combinations of satisfying recipes.

Rich, filling, colorful, divine, nourishing, and luscious are all words that can describe the wonderful creations of the Middle Eastern.

Despite the Middle East's cultural diversity, its cuisine has a level of homogeneity that can be seen in the popular use of olive oil, parsley, mint, garlic, sesame seeds, chickpeas, nuts, olives, dates, fava beans, tomato, spice, wheat, and rice.

Mezze; small dishes of food, embody the generous, sharing culture of the region, and provide an opportunity to try an array of different flavors and textures.

The Middle East incorporates the Fertile Crescent, including the land between the Tigris and Euphrates rivers where wheat was first cultivated, followed by rye, barley, lentils, beans, pistachios, figs, pomegranates, dates, and other regional staples.

The domestication of sheep, goats, and cattle took place in the region as well. Fermentation was also discovered there, in order to leaven bread and make beer. Additionally, the earliest written recipes come from that region.

As a crossroads between Europe, Asia, the Caucasus, and North Africa, it has been a hub of food and recipe exchange for millennia.

During the first Persian Empire, the foundation was laid for modern Middle-Eastern food when rice, poultry, and fruits were incorporated into the local diet.

The region was also influenced by dumplings from Mongol invaders; turmeric and other spices from India; cloves, peppercorns, and allspice from the Spice Islands; okra from Africa, and tomatoes from the New World.

Religion has impacted the cuisine, by making lamb the primary meat since both Jews and Muslims do not eat pork.

Here are a few of the recipes I've been working on recently. Very happy to share them with you.

View, E-mail, print or add recipes to your own menu collection.

Below I have a link to a recent cooking class recording where you can see me making some of the recipes and explaining each step in more detail.

Light, crispy and packed with herby aromas. The best ever chickpea falafel recipe. High in protein, fiber and 100% gluten-free.
View E-mail Print Save Go to Collections

This quinoa tabbouleh is 100% gluten-free, vegan, quick and easy to make recipe
View E-mail Print Save Go to Collections 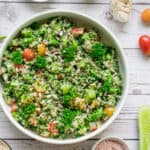 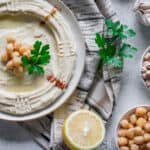 This baba ganoush recipe is the most delicious and It’s easy to make! You’ll need eggplant, tahini, olive oil, lemon juice, garlic and spices.
E-mail Print Save Go to Collections 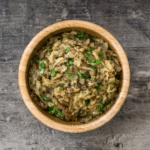 Learn how to make ultra creamy tahini sauce! The best tahini sauce is creamy, deliciously tangy and irresistible. This recipe is easy to make. You’ll just need a whisk!
View E-mail Print Save Go to Collections 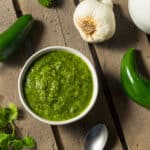 All you need to know about Chickpeas

Chickpeas really are a miraculous ingredient with so much history and cultural relevance. I use chickpeas in many different recipes; from flatbreads and falafels to blondies and smoothies. They are inexpensive, versatile, and super nutritious.

Here is my article about why you need more Chickpeas in your life.

Hi, my name is Jamie from Galway in the West of Ireland. I've been cooking in Michelin Star kitchens all around the world for most of my career. In 2015 I launched The Holistic Chef to focus on the nutritional aspects of food. Educate - Inspire - Empower became my mantra and mission. Currently, I'm living and cooking in Phuket, Thailand.

Life On Plants is a meal prepping members club. It makes plant-based cooking easy and fun!

Full support is provided to help you become a more confident cook.