Turmeric root may be the most effective nutritional supplement in existence.

Closely related to the other members of the ginger family, turmeric (Curcuma longa) is a perennial herb native to India. The herb itself is derived from the rhizome of the plant, which is dried before the useful powdered form can be acquired.

Turmeric has a warm, bitter taste and is frequently used to flavor or color curry powders, mustards, butter, and cheeses. The root of turmeric is also used widely to make medicine.

It contains a yellow-colored chemical called curcumin, which is often used to color foods and cosmetics.

Turmeric smells slightly like mustard but has a hot, almost pepper-like bitterness to it that complements a variety of dishes, this super herb has also been praised as one of the most comprehensive and powerful herbal medicines in Ayurvedic treatments and other traditional cultural remedies.

Curcumin is the most important active ingredient of this “super herb”.

Turmeric is a sacred spice used in religious rituals and is mentioned in Sanskrit texts dating back more than 4000 years. It was originally grown in India for its coloring and medicinal properties.

The Arabs introduced it to Spain, which was, for a long time, the only European country to use spice in its cuisine. East to West trade explains the different names given to the spice. It was called cúrcuma in Spanish, after its Arabic name, kurkum, meaning saffron, leading it to be mistakenly referred to as Indian saffron or the poor man’s saffron.

Having been used for centuries as a powerful dye, in the 17th century, turmeric was even used to give a ‘gold’ appearance to certain metals. Its use as food coloring dates back to 18th century Europe.

In Indian culture, the importance of turmeric goes far beyond medicine. The Hindu religion sees turmeric as auspicious and sacred.

There is a wedding day tradition in which a string, dyed yellow with turmeric paste, is tied around the bride's neck by her groom. This necklace, known as a mangala sutra, indicates that the woman is married and capable of running a household. The tradition still continues in Hindu communities and has been compared to the Western exchange of wedding rings.

In parts of southern India, a piece of the turmeric rhizome is worn as an amulet for protection against evil spirits.

Turmeric needs a specific temperature and environment to thrive, so it is not widely cultivated throughout the world.

India is the world's largest producer.

Chronic inflammation contributes to many common Western diseases. Curcumin can suppress many molecules known to play major roles in inflammation.

Curcumin has powerful antioxidant effects, It neutralizes free radicals on its own but also stimulates your body's own antioxidant enzymes.

Some of the amazing health benefits of turmeric and curcumin include:

How to incorporate turmeric root into recipes?

Turmeric powder can be added to smoothies, stir-fries, curries, cakes, bread, and muffins.

Turmeric root can be juiced, sliced, and added to tea or added to curry pastes and marinades. The root can be grated and used in recipes just like fresh ginger. Here is my turmeric root jamu recipe.

Keep in mind that the anti-inflammatory properties of curcumin are enhanced if you consume turmeric with black pepper.

Be cafeful, wear gloves.. or your hands will go yellow!

Have you tried my turmeric Jamu? 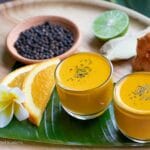 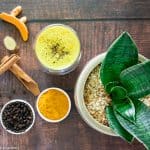 The use of turmeric dates back nearly 4000 years to the Vedic culture in India, where it was used as a culinary spice and had some religious significance.

Where to buy turmeric

Your local health food store or from many different online shops. Choose a grade A organic product.

Hi, my name is Jamie from Galway in the West of Ireland. I've been cooking in Michelin Star kitchens all around the world for most of my career. In 2015 I launched The Holistic Chef to focus on the nutritional aspects of food.